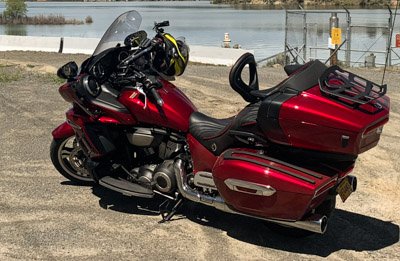 2018 Star Venture 12,000 mile review. We replaced our 2013 Vstar Deluxe. Long distance touring is our thing. The Star Venture is spoiling us.

We loved that bike. With some minor customizations it carried us and our belongings, all over the Western US & Canada. Was it perfect? No, but it’s what we had, so we just got on and rode.

I promised myself; someday I would get a Goldwing for Karla’s comfort. She never once complained, but I knew that pillion was probably like a brick. The problem I had, was I didn’t think I was, “old enough” to be riding a Goldwing. That is an old man’s bike (I was turning 60) and I wasn’t willing to accept either my age or my rigid thinking.

Sometime, I think in 2017, Yamaha announced the Star Venture, it seemed too good to be true. A V-Twin with supposedly all the comforts of a Goldwing. It had pre production issues and was delayed. That was cause for concern. A totally new design and there were problems…..I knew I had to wait. I waited until 2020.

These bikes bombed on release. Sales were very low, leading to doubts it would make it past one model year. Goldwing had decades of proven reliability. I feared making a $28,000 mistake. Patience has never been my mantra.

Reviews were mixed. I read and watched every one of them with plenty of confirmation bias. I loved the reviews that praised it, and I was skeptical of the negatives.

Adam Waheed of Riders Domain gave it a 3 segment review on YouTube. I like Adam’s work and well, he liked it. By now, I was even seriously looking at the new Goldwing….

The “biggest” deciding factor was storage. The Goldwing reduced theirs and it’s much less than the Venture. Now, I had to wait. Given the slow sales of the Venture, and knowing the emotions of buying a brand new bike; surly there would be someone who would sell within a year of buying.

After I waited over 2 years it was time. I searched CycleTrader sorted by lowest price first. There were over 200 of the 2018 model still in showrooms. I was willing to fly anywhere for the best deal. Riding home from Alabama did not seem like an obstacle. The lowest price was 100 miles from home…..so much for a week long ride.

As careful as I thought I was, I made a glaring mistake. The Star Venture comes in 2 variations. The Transcontinental package adds; SiriusXm, Navigation, Fog lights, rear speakers, an alarm and a CB radio.

I bought this bike over the phone & Internet, excited about the price, I wired the money.

My wife dropped me off in Sublimity, Oregon at the dealer. I was already going to be late for a meeting of the Governor’s Advisory Committee on Motorcycle Safety (GAC-MS) so I was rushing.

I didn’t even realize it wasn’t a Transcontinental until after the meeting when I looked for the satellite radio, a must have for me. What an idiot, I thought. What can I say, Love is Blind 🙂

Making it a T.C. sort of

I’m the Safety Director for a trucking/concrete/construction company and we use CB radios all day. I knew I didn’t want a CB on a motorcycle, nor did I want an alarm. But for the rest, I would need to drop some coin.

What I did & how much it cost

To get an, almost TC, I spent another $600. Then I added extras I wouldn’t have gotten on a Transcontinental. That set me back another $3175. More about those later. It’s still a lot of money, but I have exactly what I wanted, for $19,675. I really wanted those rear speakers, but to do them, Johnny Cash style would be an additional ~$2000. The stereo is outstanding as it is.

Within a month of picking up the bike, COVID hit the US. Oregon went into a, “Stay at Home” lockdown. That was a long couple of months of polishing.

I put the first 1000 miles riding around locally. Got through the first oil change and got used to handling 865 pounds. We usually make a couple, multi-thousand mile trips every summer, but COVID smashed anything we thought was, “normal.”

Karla’s son was trying to get married. After rescheduling, choosing a new venue and complying with COVID restrictions, they settled on Telluride, CO. Limited to only 10 people total, I didn’t make the cut. Nevertheless, she had to get there somehow. I drove her to Colorado and then a week at one of my favorite places, Moab UT.

One night out at Arches National Park; trying my hand at, astrophotography.

Tell us about the bike fool

I love the way this bike handles, I admit my bias upfront. Are there things I don’t like about it? Honestly, I haven’t found any. Other reviews will complain about the low red-line. 4500 RPM’s is low, no doubt. It does require you to learn to short shift, I got used to it easily. I think, maybe people like to hear the engine wind, not on this bike.

It has a truckload of torque, in any gear at almost any RPM. If you lug it down in 3rd or 4th gear and twist it…..it pulls right up. The addition of 6th gear over the Vstar, makes highway cruising even better. I rode I-80 comfortably at 95 mph, it’s smooth as silk. I rode it in bitter wind across Nevada where you might think it would get buffeted off the road. It felt no worse than another smaller bike.

Although the Star Venture is heavy, it doesn’t feel like almost 900 pounds (1300# with both of us and gear), it feels remarkably nimble. Compared to the Vstar 1300, it corners better, which even surprised me. Parking lot speed handling also surprised me. I can U-Turn in a residential intersection. I’m not a great rider, but again it outperforms our Vstar 1300.

The next trip was again affected by COVID. Karla’s mother passed away and we were unable to have any kind of family rememberacnce until mid-summer. Karla flew this time, but I saw an opportunity to ride the coastline.

I went to Astoria, OR and turned south. At Leggit, CA. I choose Hwy 1 the PCH. Big Sur was closed by a fire and I planned on going inland at San Francisco. As luck would have it, by the time I got to SF, the highway opened. There went another 1000 miles along the Pacific ocean.

Although, I ride this around town and I ride it whenever I get the chance. Where it shines is as a long-distance, thousands of miles tourer. Comfort, power, storage, range, it does it all superbly.

With a 6.5 gallon tank, I’m averaging 42 mpg and stopping every 220 miles for gas. The adjustable windshield offers choices for, wind in your face vs in the bubble. The stereo is loud enough that I never turn it all the way up, and I like (need) loud music. Rock crushers, even with ear protection are not easy on your hearing.

Star Venture comes with ABS and linked brakes, stops quickly for its size. It has reverse and that comes in handy. The stock seat was actually very comfortable, but the backrest for a tall guy was not adequate. The Corbin seat was expensive, but I’d do it again just for the backrest. Stock seat heater was warmer than the Corbin, but I’ve never had a heated seat, so bonus, heated grips are too hot on high.

One day, Karla stayed on at gas stops. She sat on that seat for a full 8 hours and said, “it’s beautiful.”

Our trips are usually 2 weeks or less. We pack light, but I carry 2 cameras, a tripod, a drone, binoculars, an air compressor and other stuff. Click here for our what to carry page. We always carry rain gear and on many trips we bring heated gear as well. The old way was to get on my knees in every motel parking lot and strap on a huge tail bag. Now, with this massive trunk and a bag on top, it’s so easy. While it needs updated for the new bike, click here for our packing/loading page.

Star Venture has a lot of plastic

This is an 1850cc motorcycle wrapped in 200# of plastic. I may be exaggerating, but it’s a load of plastic. I think it’s sturdy, but it’s full of nooks & crannies that take more time to clean. The bugs stick in the most difficult places. It’s a lot of crap to remove if you, or your mechanic ($96/hour) works on anything. Changing the rear tire means removing the saddlebags.

While I made a mistake right off the bat, I would do it exactly the same again. I have zero complaints. I’ve read and watched every review and I understand what other’s think are it’s faults. However, those reviews are almost always a, Demo Day short test ride. After 12,500 miles this summer, I can’t wait to load up and head out for a couple of weeks.

I did some vinyl wrapping to protect the paint and plastic. Now, I can’t think of anything left to add or change.