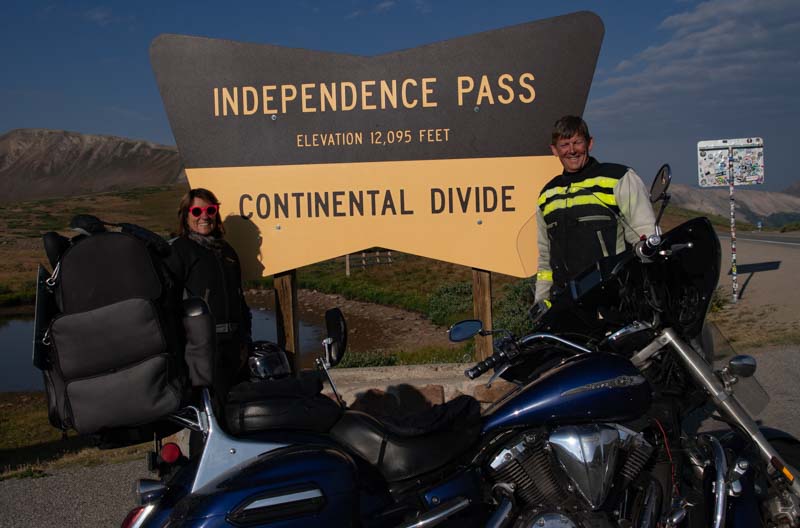 A Colorado motorcycle trip has been on the bucket list forever, but it was way down in the deepest part of that pail.  Almost so deep, I wasn’t sure we ever reach that one.  Riding a motorcycle in Colorado has always been a high priority, but getting there from Oregon, that’s a Bridge (Road) Too Far….almost.

As we have checked off so many of the other western United States, “must see” spots, it just kept calling to us.  Glacier was magnificent, Yellowstone the trip of a lifetime, Zion & southern Utah, breathtaking.

Colorado motorcycle trip, where the entire state is a motorcycle riders paradise.  The majestic Rocky Mountains, the unbelievable views and not a straight section of road anywhere to be found outside of the Interstates….we needed to go, we had to go. But damn, it’s 2200 miles roundtrip to Denver, and I wanted to ride 2000 miles around the state, minimum.  I have a job, they expect me to show up, this is a problem.

We explored shipping the bike ahead and flying to Denver.  I would need to rent a storage space, have the bike delivered, someone meet it, store it and on and on. I gave up.  I would wait until retirement before I could pluck that shiny diamond from the bucket list.

I’ve done trips without Karla and it’s like seeing the NBC peacock before color TV.  Yes, I’ll ride; anytime, anywhere. But without her, it’s as if the color is gone from my world. One day I was in Scott’s office, talking motorcycles, lamenting my fate; no Colorado for me.  He says, “Why doesn’t Karla fly to Denver and you ride it in two days?  What?  That’s brilliant, why didn’t I think of that?  Having a boss that rides long motorcycle trips…..Winning!

The flight to Denver is two hours, I suppose it was an air-conditioned airplane, one of those fancy ones. But the seats are small and those snacks, ugh.   About 10 hours into my first day, I was crossing eastern Idaho in 109 degrees.

Karla sent me a photo; laying by some swimming pool, yeah that looked really uncomfortable.  I replied with a photo of a thermometer.   At least I wasn’t in some TSA line.

There is one website that has already done the work.  Ken Bingenheimer is the owner.  Ken is a long time Colorado motorcyclist and he knows Colorado Motorcycle roads.

This site was our starting place with a listing of all the great routes.  There are about 50 roads listed and we tried to include 20 of them in our trip.

Everyone knows the, “Million Dollar Highway.”  Some people will go to Colorado just to ride it.  Many people will only ride that, “Top Ten in America” road…and miss so many others.

The Million Dollar Highway is a great road for sure, you should ride it.  However, after riding all over the state, I would say, in Colorado, it’s only in the top 5.  In my opinion, it’s the most famous, but it’s not the best.

2Vegans2Wheels has an entire section on, “How to Plan a Motorcycle Trip.

Personally, I hate riding the slab.  However, when you’re just trying to get as far, as fast as you can, it’s the only way to go.  I spent hours with the speedometer north of 90 mph.

When I saw a school bus approaching in my mirror and I was doing 85, I was shocked.

I logged 550 miles on the first day and parked in Ogden, UT.  I was beat. The ride out of Ogden crossing the Wasatch Range is beautiful.

Second day was 600 miles across Wyoming, I won’t bore you.

Colorado Motorcycle Trip was not a city trip

If you’re doing a Colorado Motorcycle Trip you really need to include a ride up Pikes Peak.  I remember learning about this place from Bugs Bunny cartoons, so how could I pass it up?

Who am I to question a man’s dream?  What has become a pretty famous, “Roadside Attraction” started in the mind of a 15 year old Coloradan.

Jim Bishop bought this piece of land in 1969 for $450. One thing led to another.  Part plan, part passion and a dose of, “You can’t tell me what to do with MY property” became the castle.

We seek out known Roadside Attractions on any trip.  From smaller ones such as the, “World’s Largest Frying Pan” to Bishop Castle they’re all interesting.

There are, Motorcycle Roads” and there are, “MOTORCYCLE ROADS”

Made famous to me by, Dom Chang of “A Redlegs Rides blog” fame, there is a road.  Further encouraged by, Gary France of, “France In America.”  I needed to find this road.

Canon City, CO. is north of Bishop Castle and Southwest of Pikes Peak.  There is a lot of space and roads in Colorado, getting lost is not too difficult.

Skyline Drive is a ridge line road that you don’t need to drive, but you must drive.  It doesn’t take you anywhere, it’s just the way you need to go.

For a road to be a, “Motorcycle Road,” they usually have lots of curves.  Skyline Drive is fairly straight, which is probably a good thing.  Should you tell your passenger every little detail about every road…beforehand?  Sometimes I do and some things are better left unsaid.  I think she appreciated experiencing this one as it happened.

You know the place from, “The Shining.”  The Stanley Hotel; the haunted one, the place to stay in Estes Park!   We considered it, but since this trip was so over-booked leaving us short on time, we stayed at Best Western.

I just didn’t have time to be fighting ghosts and arguing with the dead.

However, the Silver Saddle Inn was a great place for one night.  It was clean, nothing creaked and the staff was so nice,

I’m pretty sure it wasn’t haunted.

Estes Park is the gateway to RMNP.  Just a short drive from town and you’re on the, “Trail Ridge Road.”  Consider another bucket list ride for motorcyclists, it is the highest continuous road in America.

Just a small part of RMNP, on the road you’ll spend a significant portion above 11,000′.  It looks a bit like tundra with wide open spaces and views.  We did not take advantage of all the outdoor opportunities it has to offer.  With our breakneck pace, we simply rode through to say we had.

If you’ve read any of our previous Trip Reports to National Parks, you know we go early and avoid the crowds.  On this day we were into the park at 0630, alone.

Only the animals and a few park employees shared the park with us.

The summer of 2018 was a bad year for forest fires.  The smoke is sometimes more visible than others in our photos, but it was bad.  We took way fewer photos than usual on this kind of trip, just because the views were obscured.

It’s one of the risks we take in planning & making reservations months in advance.  It was still worth the trip, it’s just sad that we’re having so many fires out west these recent years.

There were times when we knew the scenery must be spectacular, but we were surrounded by haze.

This must have been the friendliest hotel we have found.  These folks made you feel like you were family and were staying at their house!

Next up – Independence Pass

If I haven’t said it already, A Colorado Motorcycle Trip is about riding great motorcycle roads.  There is an endless supply and you want to ride them all….but you can’t.

So you do have to set priorities.  One of them is Independence Pass.  It’s famous, it’s steep, it’s sometimes one lane with no guardrails and it’s closed in the winter.

Average snowfall is over 200″

I am laughed at as one of the most over-prepared motorcycle travellers.  OK, it’s just Karla laughing at me, but still.

You’ll be as low as 6000′ in elevation and as high as 14,000′, yes all of Colorado is mountain weather.  Typical of these elevations, there  are afternoon showers.  It may only rain for 5 minutes, or 5 miles or it may rain for an hour.

The rain was never a problem, but it rained and we expected it.  It was sunny and hot and then it was not.  I did not pack heated gear, it was August.  I may have been tricked.

On the early (0600) ride over Independence Pass, I was freezing.  I almost gave up.  I had to stop and warm my hands on the engine, gloves were not enough.  Later that day it was hot, and I mean hot.

What to expect in part 2 of the Colorado Motorcycle Trip

Thank you for sticking it out and reading this far.  I hope the story inspires you to go to Colorado, or get on your motorcycle and go anywhere.

Life is best lived through experiences and emotions.