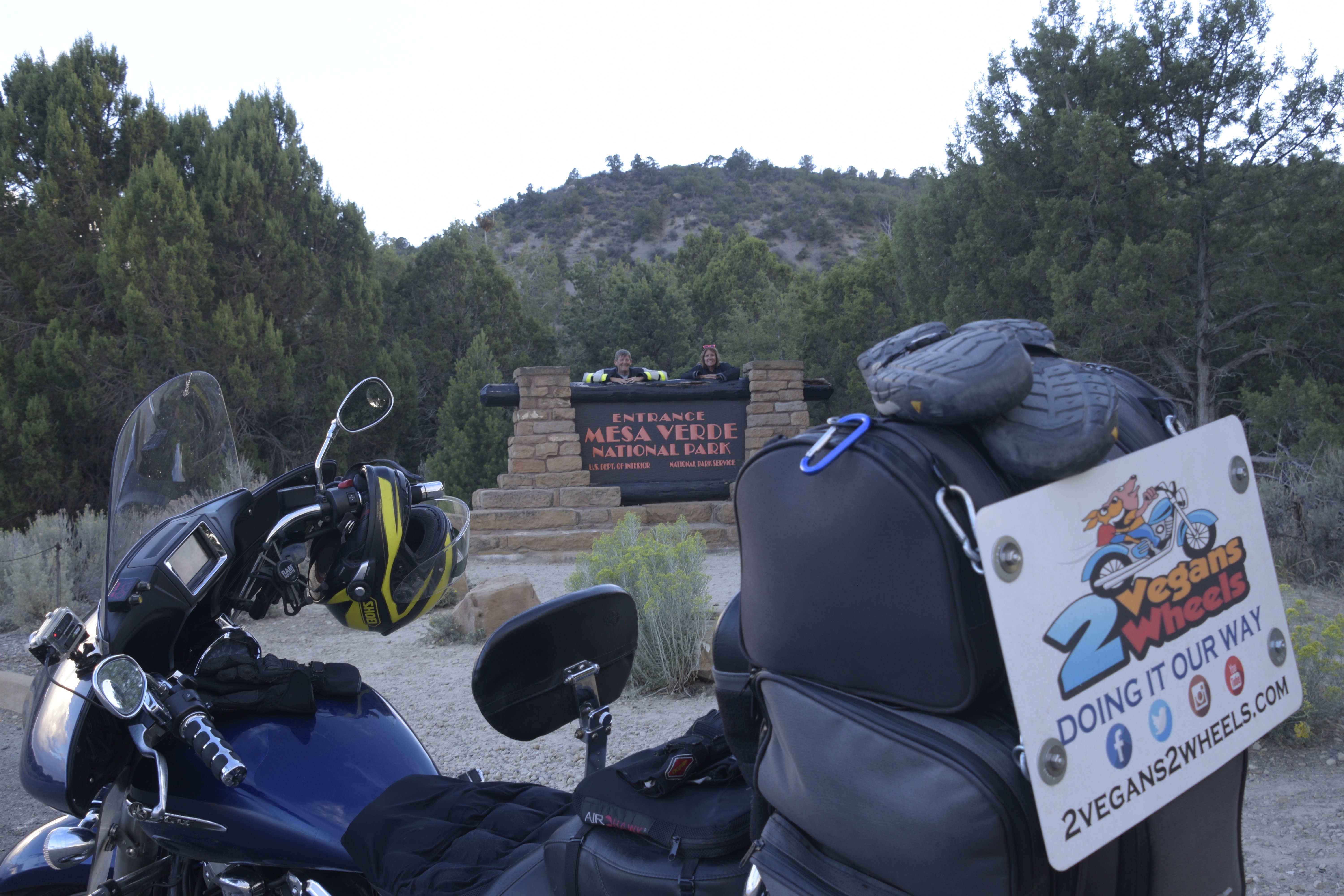 The second half of our Colorado motorcycle trip takes us through the central Southwestern roads. Black Canyon of the Gunnison, Mesa Verde National Parks. Durango Silverton Railroad too. 5 more days of riding some of the best motorcycle roads in America.

A shady spot to change clothes. I grew up in a logging town; never had good manners, an actual hillbilly at heart. I’m not proud of that; well, actually I am. That’s how hillbillies are. Let’s just say I can’t help it

By the time we got into downtown Aspen, it was warming up quickly I still had on 4 layers from the trip over the pass and now I was way too hot.

Karla had gone over to get our passes to ride the tram, and I was on a sidewalk bench changing clothes. I now realize that in the line of parked Ferraris and Maserati’s, a motorcycle and a guy stripping on the sidewalk would draw attention.

I must say the Aspen Police respond quickly to such offenses. They arrived in cars and on Segway’s, I expected a hoverboarding Sargent next. Well, I wasn’t indecent, but I was a little out of place.

I would like to say this was the 1st time in my life I’ve been surrounded by police, but it wasn’t. Remembering how those previous experiences turned out, a bit of clarity came over me.

My favorite author, Hunter Thompson used to live here, they’ve seen bizarre. I told them Karla’s family was a long time homeowner here. Everyone was now smiling, I kept my mouth shut. Got away without even a parking ticket.

Carbondale is just off the highway and we had searched out some vegan grub. The Goat Restaurant served up a delicious Falafel sandwich and some hilarious art work Lots of indoor and outdoor seating, it was too hot to sit outside. Weather on this trip was at the limit of extremes. As with many motorcycle tours, it was too hot or too cold, rarely just right I learned a lot about Colorado weather, as will you if you take this trip.

Karla says, “These boots are made for walking. Hike to hanging lake.

Perhaps it was named because it hangs off a cliff, or it hangs off the top of a mountain? I may never know. But, it’s beautiful and for any reward there is a price.

We have hiked some, “extreme” places. And while I’m am proud of the accomplishment, when it’s over, I am no fun as a partner. This was by comparison, easier than, “Grouse Grind” ( See our Vancouver trip). My complaining is louder than straight pipes, and not always related to the level of effort of the hike. I’m working on that.

Look, they put up a handrail! It kept me from jumping

The map above shows a stretch of Highway 92. Leaving Hotchkiss riding south, it starts out fairly tame. But holy cow does it get into some curves. We needed to cross the Gunnison River, and there isn’t a bridge until you reach Blue Mesa Reservoir. It was raining a bit, but even in the rain I think this was one of the best rides of the trip. Very little traffic, great views and if the road was straight for more than a 1/4 mile, I’d be surprised.

One of the best parts in trip planning is finding interesting places to visit. I must admit, I had never heard of, Black Canyon of the Gunnison National Park. My bad. The canyon’s name owes itself to the fact that parts of the gorge only receive 33 minutes of sunlight a day, according to

Images of America: The Black Canyon of the Gunnison. In the book, author Duane Vandenbusche states, “Several canyons of the American West are longer and some are deeper, but none combines the depth, sheerness, narrowness, darkness, and dread of the Black Canyon. Wikipedia16% Grade At least one stretch of the original cut had a grade of 32 percent! Don’t attempt East Portal (open mid-April to mid-November) with an ungainly RV. Due to hairpin curves and switchbacks, vehicles exceeding 22 feet in length (including trailers) aren’t allowed

Wanting to ride the, “Million Dollar Highway” from South to North, we rode South out of Montrose, where we had spent the night. But instead of continuing on Hwy 550, we turned West on 62. This allowed us to hit Telluride and Hwy 145 over Lizard Head Pass

Telluride is pretty famous, somewhat for its celebrity townsfolk. On this trip we’re were rushing so no time to visit with Oprah I would have liked to see Kevin Costner or maybe even seen Tom Cruise’s closet. I’ll bet it’s nice! He wouldn’t come out of it on South Park, so probably not for 2Vegans either?

We ran out of time, but you could easily spend a full day or more.  Hikes and ticketed tours get you close to, or inside the dwellings.

Mesa Verde is special in many ways.  First, the sheer magnitude of the history here is overwhelming. Second, it’s a huge park, way more than I had figured out in all the prereading I had done.

The route into the park is a steep, narrow, winding mountain road. Depending on weather, traffic, and road construction, plan at least two hours just to drive into and out of the park. The elevations in the park range from 6,900 feet to 8,572 feet Mesa Verde is one of 23

Mesa Top Loop from the Chapin Mesa Visitor area. On this loop there are several dig sites you can tour
Another 6 mile loop, the Cliff House Loop has good views of cliff dwellings. Both loops have multiple pull-outs with telescopes.

When I say, “rest” on this trip it only means a place where we spend two nights in the same town. The only time on this trip where we didn’t get up, pack up and go every morning. It’s exhausting.

Durango is the home of the, “Durango & Silverton Narrow Gauge Railroad; The very one that Butch &; The Kid along with the, “Hole in the Wall Gang” robbed in the movie.We were not planning on quite the same adventure but we’re gonna ride that train.

Due to a track washout, we had to ride a bus about 20& minutes before boarding

Tickets should be purchased well in advance. We bought tickets on-line months before we arrived. If you make it to Durango, you really want to ride the train.

The train is often sold out Rates, per person run from “about” $70 for a one-way in an open coach to $200 for a roundtrip enclosed coach.

I suggest you splurge. There is a lot, and I mean a lot of soot coming off the engine. In an open coach you will have soot in your hair and your EYES!

We took a round-trip ride in an enclosed coach, but we hung out on the tail most of the trip. I got soot in my eyes just looking around the corner so I could take photos. It’s not pleasant.

This is the train, Butch Cassidy & the Sundance Kid robbed in the movie!

If you ride a motorcycle and you come to Colorado, you’re probably going to ride the, “Million Dollar Highway. Touted on some lists as a, “Top Ten” in the nation, this is Colorado’s most famous motorcycle route. And I’m not knocking it. Maybe I was numb to the thrill after riding 10 days on Colorado highways Maybe the hype had me expecting more.

This is the only road, that I actually had some fear built in my mind over. It was a letdown. Yes, it’s a life threatening ride. It has the 1000 foot drop off with no guardrail, but I was used to that. It is beautiful, but show me a spot in Colorado that isn’t gorgeous.

From the train, you can see cars that went over the cliffs and they never tried to recover, it’s that steep. Winter driving, no thanks. In the summer, it’s just another amazing Colorado motorcycle ride.

The ride home is typically a let down. Vacation is over and we’re not ready to face it. We are a very long way from home and it’s not, Colorful Colorado” getting there. We did get a last day of motorcycle riding in Colorado, on the way to Grand Junction. It’s not the most beautiful part of the state, but it sure beat what was coming.

One last vegan Hurrah, and a Goodbye in Salt Lake City

We would be going our separate ways in the morning. We had a bit of logistics to deal with and for that, there’s Uber.

Colorado lives up to its reputation for great motorcycle roads. Not to be missed National Parks & wildlife. Colorado is a big state and 10 days was not enough to see it all.

Million Dollar Highway is just one of many roads that any motorcycle rider would consider great. We hope you find your way to Colorado as we did.